I almost didn’t do a post on Domino’s because for most of us it’s takeout or delivery, not a place to go and eat. But then I thought, it’s nationwide and international, available pretty much everywhere, and we all get lazy and want someone else to cook without leaving the house. Since I didn’t make it, I decided it falls under the Veg Out to Eat purview.

While not the absolute best choice for healthy eating, you can order a pretty decent and veg-friendly meal from Domino’s. You can get the Build Your Own Pasta and load it up with veggies. Or, if you’re craving pizza like most people who order Domino’s, go with the thin crust (it’s the only one that is vegan), regular sauce and no cheese. While the crust is made from white flour there is less of it than the other crust options. Then pile on whatever vegetables you want! Since you leave the cheese off you get an extra veggie topping at no additional charge. Bonus: because you are eating this at home you can add even more extra toppings 👍 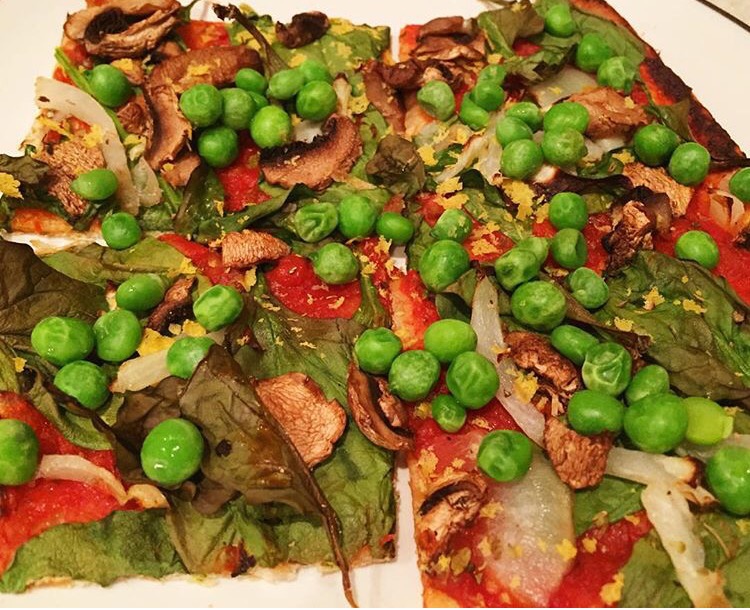 Thin crust, regular sauce, no cheese with onions, mushrooms and spinach. At home I added peas and nutritional yeast.

One creative home topping I did recently was adding a spicy vegan nacho cheese sauce on top.😋 Here is the recipe if you’d like to try it too!

Quality is pretty consistent between locations and when I’ve ordered online (rather than the phone) I’ve always had the order come correct. I have been called by the store a couple times to make sure I really meant no cheese, LOL.

So order in pizza and be lazy!