I had a mixed experience at Aji Sushi & Teppan in Winter Garden Village. On the one hand, the food was good, our waitress was friendly and seemed to try very hard to meet our needs, and the owner was pleasant and stopped by our table. On the other, the service experience overall was uncoordinated and slow and put a damper on the evening.

First, you have to pick which side of the restaurant you want to sit, sushi or teppan (where they cook the food in front of you). Having never been before, we didn’t know it made a difference as to what you could order and chose to sit outside because it was a nice evening and would give my toddler things to look at and keep him entertained. I had perused the take-out menu in advance and wanted to order a vegan sushi rolls and the tofu and vegetables. However, because we were on the sushi side of the restaurant I couldn’t order from the Teppan menu, which is what the tofu and vegetables were on. Besides sushi, that left me with only tempura vegetables (fried) which wasn’t what I wanted. The waitress offered that they could make tofu fried rice without egg. It was still a fried meal but I decided to get that (I requested the tofu not be fried) along with the veggie sushi roll (there were a few choices for rolls).

Our drinks came right away and the ginger salads and miso soups weren’t far behind. The Jasmine hot tea was great and everyone enjoyed the salad and soup. Then we waited about 10 minutes for the appetizer to come. We were told the entrées were ready so we expected them shortly. But it was another 10 minutes for my fried rice. And then another 5 minutes or so until the next entrée was brought out and still another 5 minutes until the last person in my group got her meal. Then 10 minutes after that (approximately 50 minutes after ordering) my veggie sushi roll arrived – I was the only one eating at that point and almost thought it had been forgotten. Our waitress seemed to be on top of things and stopped by our table frequently to check on us. I don’t know how our food ended up being served so spread out. It was also not crowded at all, being that it was a Wednesday evening. 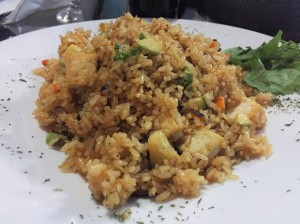 As for the food itself, the tofu fried rice without egg did have a lot of flavor, though it was (predictably) full of oil. By the time I got my veggie sushi roll I almost didn’t want it, but I’m glad I did—it was my favorite thing I ate. The veggies in the roll were asparagus, avocado and greens (a spring mix). The other people in my group had the salmon and chicken teriyaki, which they both said was excellent. I tried the mushrooms that came with the salmon and they were delicious, though a little cold. 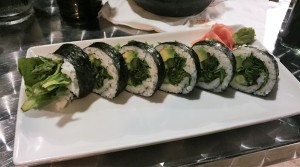 If I went back I would either: go just for the sushi, ginger salad and miso soup; sit on the teppan side of the restaurant so I could get the tofu and vegetables – but ask if you can order off the sushi menu as well and hope the uncoordinated service was a fluke; or order take-out so I could get whatever I wanted and not have to worry about the wait time for food.

Reviews and tips for eating vegan in Walt Disney World