The Top is one of the highest rated restaurants in Gainesville on multiple sites (#1 on both TripAdvisor and Yelp) and has also been highly recommended to me as having a variety of vegetarian and vegan entrees. It sounded like a perfect restaurant to try. 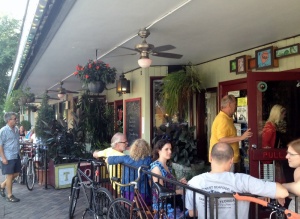 Entrance to The Top

We got there early, about 6 pm, and the place was already busy! It’s located in downtown Gainesville near the intersection of University and Main St. They have outside seating at the front of the restaurant on Main St and also a patio in the back by their parking lot. Inside is divided in two rooms, a large bar area (I’ve heard this gets packed later at night) and the dining room. There was one table for two available so we took it. We sat inside in the back, near the kitchen. The lighting is very dim and there’s a fair noise level but not so loud you can’t have a conversation. I didn’t really like sitting by the kitchen but that appeared to just be our table.

The menu is not available online (at least not an up to date version), so I tried to take pictures of it but there wasn’t a lot of light, so I apologize about the flash. The back of the menu also lists all the local places where The Top gets its foods. There are a lot of vegan items available, so I’ll start with at the top (haha, get it???). They also have a nice beer and specialty cocktail menu. 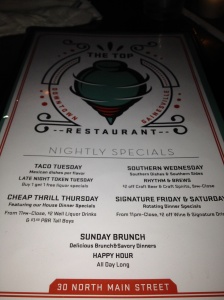 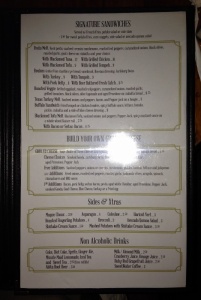 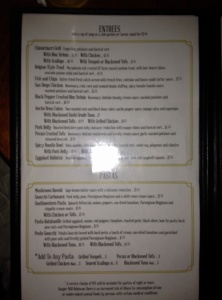 The Top offers several vegan appetizers. Unfortunately, all of the appetizer choices appeared to be fried except for the black bean cakes so there’s really only one healthy choice. We got the black bean cakes (also made with corn) with mango salsa and left off the creamy dipping sauce. They were soooo good! They were crispy on the outside and soft in the middle (hopefully they weren’t made in too much oil). As a warning, they are mildly spicy in case you are sensitive to that. The mango salsa was freshly chopped tomato, onion and mango and was fantastic paired with the cakes. I certainly didn’t miss any extra sauce. Dan also gave these his seal of approval. 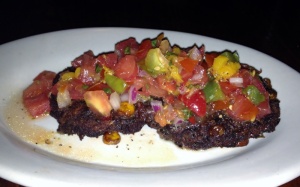 There is a good salad selection and there are several proteins you could opt to add: grilled tempeh, pecan or blackened tofu, or buffalo tempeh (fried). They even have a Vegan Caesar salad! Dan got the Caesar since he loves these. It was comprised of romaine lettuce, crouton, dressing and a couple lemon slices. While not exactly a Caesar taste, it’s a pretty good substitute and has a tangy, lemony flavor. This has inspired me to find a vegan Caesar dressing recipe to make at home so Dan can stop eating traditional Caesar dressing. 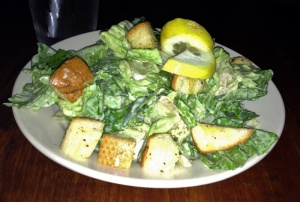 For the main course there are multiple tempeh and tofu options available and two veggie burger patties to choose from, black bean and falafel, both of which are vegan! Sometimes having multiple decisions work against me, I want to try everything. Dan stuck with the classic black bean burger which is served on pretzel bread (he’s becoming the veggie burger connoisseur). The patty is soft (not firm like a Boca or Morningstar Burger). Overall Dan gave it a thumbs up, especially to the bread. 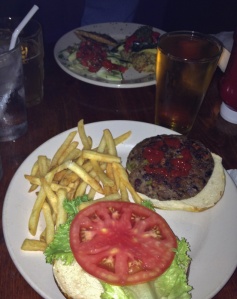 I ended up choosing a special, the Pesto Risotto with sun-dried tomatoes. The basil pesto is vegan and I love sun-dried tomatoes. It was very good and was topped with slices of zucchini and roasted red peppers. It came with a side of cucumber and tomato salad which was light and crisp with a mild vinegar taste. I also added an extra side of grilled tempeh to try it since it’s from Jose’s Tempeh Shop (http://www.tempehshop.com/), a local Gainesville business that makes organic tempeh. I liked it, it had a nutty flavor and a hearty texture.

Dan and I were both COMPLETELY stuffed (I couldn’t even quite finish everything on my plate, a rarity for me), but it was Saturday night so we got a dessert to go for later in the evening. The Top had two vegan choices: chocolate cake and peanut butter chocolate chip blondies. We got one blondie to split later. You will not be missing any butter or eggs in this treat, it was great. It is certainly loaded with sugar! 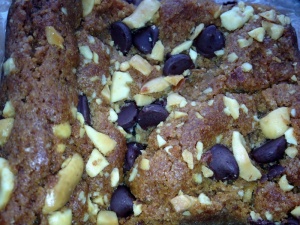 Service was exceptional. Not only was our waiter attentive, two other staff members routinely came by to pick up/serve dishes and see if we needed anything. On the bill, our waiter charged us for the vegan Caesar as a side to an entrée rather than a small salad which saved a couple dollars, even though we ordered the salad first. I appreciate the little things.

I will definitely be going back to The Top, if for nothing else than to try their Eggplant Rollatini (made with vegan cashew cheese and served over spaghetti squash). There are multiple vegan options on the menu and if you choose wisely you can have a very healthy meal.

I loved The Top so much, I picked it for my going away dinner from Gainesville. We had a large group of 14 and we got a table in private room area which was awesome. The Top does not take reservations, but we only had about a 20 minute wait for a table on a Wednesday evening.

I ordered three different things to try: The Buffalo Tempeh appetizer, Eggplant Rollatini and the vegan Chocolate Cake. Oh my, it was ALL delicious. The Tempeh appetizer is HUGE, I shared it with the entire table and was still feeling pretty filled up when my entree came. While the buffalo sauce on it’s own is plenty good enough, rather than the blue cheese that comes with it I got a nutritional yeast dip that was also very good.

The Eggplant Rollatini was everything I hoped it would be. I can’t believe how cheesy it tasted, without cheese or any fake cheese. Serving it over spaghetti squash made it a lighter dish. It’s amazing what creative chefs can do! It’s hard to take a good picture of this dish. 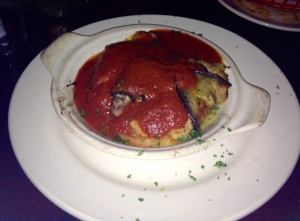 And the Vegan Chocolate Cake… what can I say, it was also HUGE and AMAZING. It’s kind of nice that it’s so big because then I had some for the next day. It’s rich and chocolaty – everything you want as a chocolate lover.

Again, we had wonderful service – and we tested the waiter with our large group! I highly recommend this restaurant.

2 Responses to The Top – Gainesville, Florida

Reviews and tips for eating vegan in Walt Disney World